For this purpose, the Ukrainian Hydrometeorological Center collects, processes, maps and delivers meteorological information to users:

- from the radio sounding of the atmosphere points - data on the distribution of meteorological parameters up to a height of approximately 30 km;

- from the meteorological watch offices of UkSATSE - arial forecasts for low-lewel flights  (from the surface of the earth to the height of 3050 m) GAMET, SIGMET, AIRMET, AIREP SPECIAL information for the territory of Ukraine;

- from the EUMETCAST satellite system – satellite images of the territory of Europe every 15 minutes.

METAR reports and TAF forecasts of all Ukrainian airports, as well as WAREP telegrams about on dangerous and natural meteorological phenomena and MRL data from the territory of Ukraine are sent to the meteorological watch offices of UkSATSE.

At aerodroms, before departure, consumers (airlines) can obtain aviation meteorological information from airport meteorological authorities or international aviation data bases and with the help of automated briefing systems on their own.

In flight, aircraft crews receive weather information from air traffic service controllers and from regular VOLMET radio broadcasts. There are 4 VOLMET broadcasting points in Ukraine, each of which constantly broadcasts hourly METAR summaries of selected airports.

On approach or climb, crews receive the latest local regular MET REPORT or local SPECIAL by listening to ATIS VHF radio transmissions, or any additional information directly from the air traffic controller. 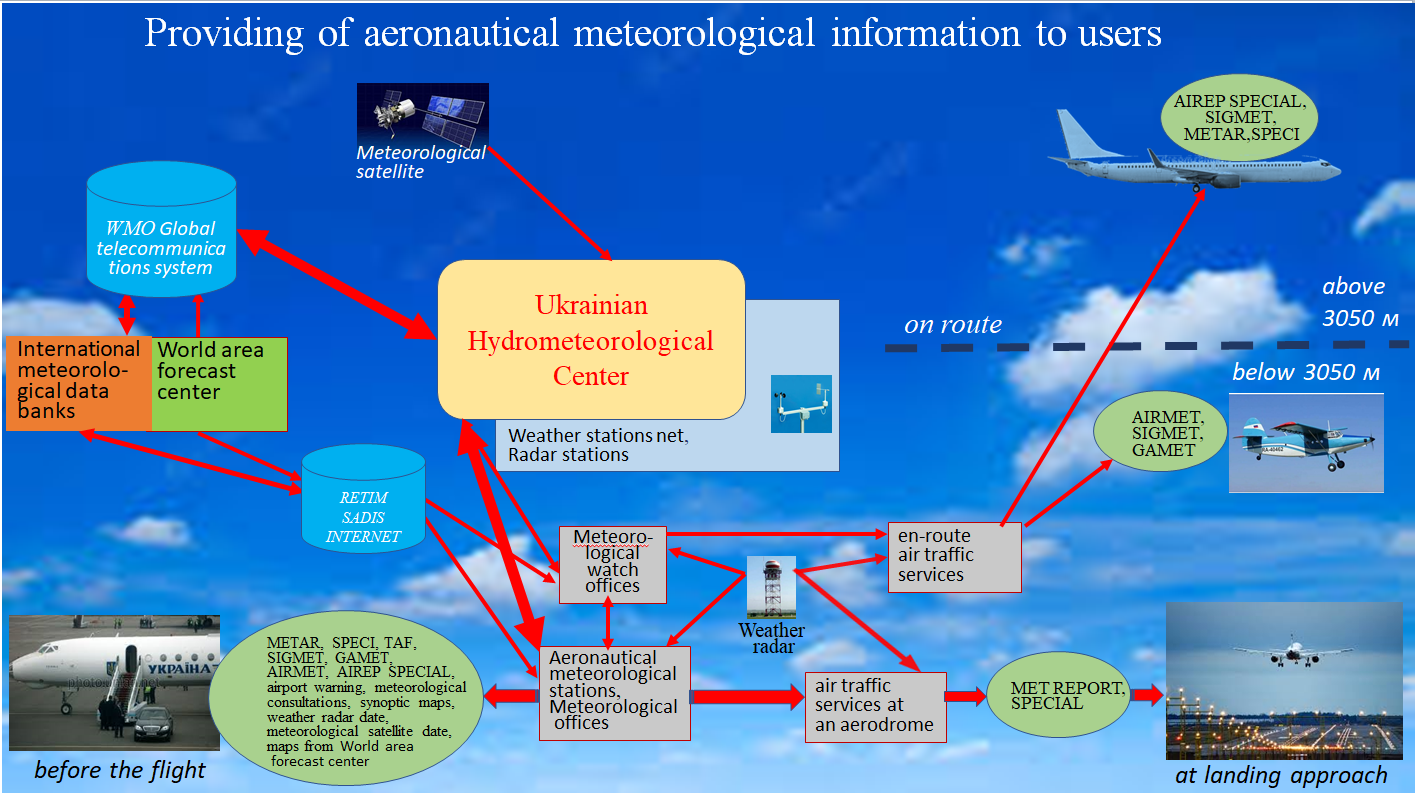 AIRMET - information on the actual or expected occurrence of specified weather phenomena along the flight route which may affect the safety of  low-level aircraft operations;

AIREP SPECIAL - special messages from aboard the aircraft on specified meteorological conditions observed during the flight (provided in the form specified by ICAO);

GAMET - an arial forecast compiled in plain text for low-level flights for a flight information region;

METAR - regular aviation meteorological report on the weather at the aerodroms in WMO code form;

SADIS - international satellite system for the dissemination of information for aviation purposes;

SIGMET - information on the actual or expected occurrence of specified weather phenomena along the flight route that may affect the safety of aircraft operations;

SPEСI - a special aviation meteorological report on the weather at the airdrom in WMO code form;

TAF - weather forecast for the airfield in WMO code form;